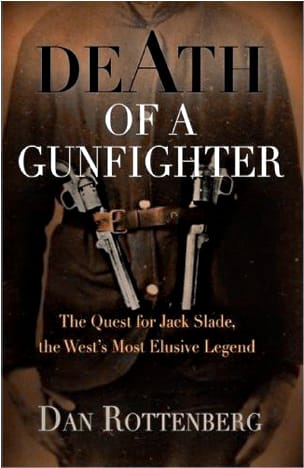 Who Was Jack Slade?

As a wagonmaster and stagecoach mail superintendent in the 1850s and 1860s, Slade organized mobs of unruly men and animals into efficient teams capable of defying floods, droughts, blizzards, outlaws, and hostile Indians. In a land devoid of courts and law enforcement (present-day Nebraska, Colorado, and Wyoming), he functioned as a benevolent prairie feudal lord, almost single-handedly protecting settlers, emigrants, stagecoach passengers, and the U.S. Mail. By maintaining order along the roughest division of the Central Overland stagecoach line on the eve of the Civil War, Slade enabled the government in Washington to maintain contact with the Pacific at a time when California with all its riches threatened to secede from the Union. He helped launch the fabled Pony Express. And once the war began, Slade’s presence enabled the gold and silver of the West to flow eastward to finance the Union cause. He remained on the job for four years at a time when other men burned out within months.

Yet this same gifted and courageous leader ultimately cracked, degenerating into a brawling and dangerous drunk. In the process he lost not only his life but his reputation as well.

Since Slade’s death in 1864, persistent myths and stories have defied the efforts of writers and historians to capture the real Jack Slade. Despite his notoriety and place in history as the first celebrity gunfighter, the pieces of Slade’s fascinating life–including his marriage to the beautiful Maria Virginia–have remained scattered and hidden.

In Death of a Gunfighter: The Quest for Jack Slade, the West’s Most Elusive Legend, journalist Dan Rottenberg assembles more than fifty years of research to reveal the true story of Jack Slade, one of America’s greatest tragic heroes.

“There was such magic in that name, SLADE! I stood always ready to drop any subject in hand, to listen to something new about Slade. . . . Slade was at once the most bloody, the most dangerous and the most valuable citizen that inhabited the savage fastnesses of the mountains.”

Death of a Gunfighter is an enjoyable read, and it is also a heroic effort, considering that the borderland of fable is hard country to track a man…